This weekend, I actually got some turning done. I wrecked a vase, and had 7 attempts at turning a hammer shaft for this week’s planned project. The vase was part turned, and had been put away to dry. I was making the finishing cuts and sanding before parting off the tenon where it was held in the chuck.
I had reversed it onto a jam chuck and was taking very light cuts at the tenon, when disaster struck. The last part of the tenon snapped off and the base of the vase hit the tool rest. I will try re-mounting it later, after sanding the base, to try a rescue.

The planned project was inspired by Christopher Fisher, who is a blind woodturner based here in the UK. Chris has a youtube channel where he showcases his turning progress while re-learning how to turn without sight. Really cool stuff, check him out.
Another hobby Chris has is making horror props which he sells. The idea for this came partly from Chris, partly from this pen, and partly from Cap’n Eddie who has a video on making a pen from a Bic biro.
This is the mini vampire killing kit.

The timber is well seasoned oak, finished with friction polish.

Part of the wood had a huge knot in it, which shows in the head of the small hammer, and is the reason the handle snapped so many times. 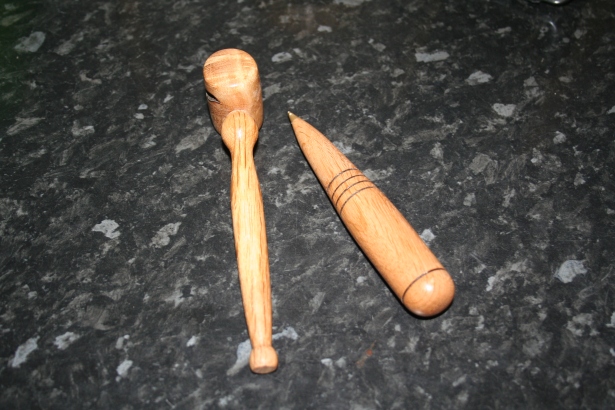 The ballpoint part, rather than using a twist pen kit, is a re-fill from a 5 for a pound Bic biro from the supermarket.

Kitchen counters are no the best surface for taking photos, hence the blurriness. I will re-take the photos later using a back-drop from my light box tent. I may even have managed to salvage the vase by then.

Update: I didn’t get back out to attempt a rescue of the vase. Indoor chores took priority. I really need to work out a schedule where I get more than 3-4 hours a week in the shed.

This entry was posted in Woodturning. Bookmark the permalink.
Handcrafted Pens & Unique Wooden Gifts
Woodshed In The Stowe