Why Royal Mail should not have been sold, and why I never use courier companies

I recently ordered my Clubman SK100 chuck from Axminster. A lovely piece of kit once I finally got it on to the lathe. Unfortunately getting it there was a complete nightmare.

The courier claimed the goods were delivered, and signed for by “Speirs,” at 15:06 on December 30th. Not true. There were at least 2 people indoors all day.
When I called the courier, UK Mail, I was told, “You need to go and talk to everyone in the  street to see where the driver left it before we will talk to you.”
“Errmm no.” I replied. “Your driver needs to deliver the goods as your company was contracted to do.”
The UK Mail customer services agent then interrupted me with, “You need to shut up and listen to what I am telling you to do. You need to speak to all your neighbours first.”

Cue an extremely loud explosion from me and courier threatening to “hang up on you if you don’t behave.” Although I did lose my temper somewhat, I should point out at this juncture that I did not swear. I still have no idea how I managed not to.

Called Axminster, who instructed courier to go and collect goods and return them, and sent a replacement for pre-10:00AM next day delivery using DPD instead.
Or rather that’s what was agreed, although next day I got an e-mail saying they were using the same shonky courier. The excuse I got was that DPD would not collect for pre-noon deliveries that day so they used UK Mail instead.

In the late afternoon of December 31st the courier from UK Mail turned up with the original parcel, claiming she had delivered the parcel to someone at the wrong address by mistake. This, of course, is an out and out lie. The property she claimed to have delivered my goods to is for sale and has been empty for the last 6 months. The box was sodden, as if it had been dumped outside the door of an empty house and left there overnight. So who signed my name for the goods? 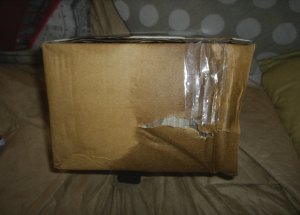 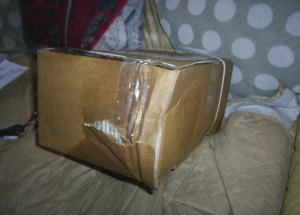 These photos were taken around 4 hours after the box was delivered.

Be honest. If you were delivering something to what you thought was the correct address, the property had no curtains or blinds up, no lights on (on a cold December afternoon in Scotland), you got no reply, and there was a for sale board outside – you would question the validity of the address, wouldn’t you?

Axminster customer services promised to contact me by January 2nd 2015. They did not. Apparently the person dealing with my case didn’t feel well and went home instead. Well…… it was new year.

The “pre-noon” delivery of the replacement chuck by UK Mail never took place. A courier turned up mid-afternoon on 2nd January 2015 with a delivery. Axminster appear to be completely unconcerned that this company are unable to follow simple instructions, or adhere to contractual obligations. They also seem to be unwilling, despite evidence being apparent, to feel any empathy for their customers.

Arrangements were made for this courier to collect the surplus chuck on Thursday 8th January. I advised Axminster the chuck would not be handed over without a receipt. The courier turned up today, a day early – and claimed it was not company policy to receipt the collection of goods.
What kind of company hands over hundreds, thousands, hundreds of thousands of pounds worth of tools and machinery without a receipt from the courier?

STOP PRESS!
UK Mail courier, the original one, the one who allegedly delivered my chuck to the wrong address yet managed to get my signature… – yes, her – turned up today to collect the surplus chuck. The one her company sent someone to collect yesterday.
Apparently she has been reprimanded and told by the company that what she did was fraud.
Now. Is it just me? If I had an employee who acted fraudulently and caused damage to my company’s reputation, would I continue to employ said person?
Hell no!
Her ass would be grass and her feet would not touch the floor.

Despite the chuck being a well made piece of kit, and being a delight to use, I am now tied in to a chuck system where the only way I can get replacement/additional jaws is by using the company who let me down so badly supplying the chuck in the first place. Not a particularly good position to be in.

2 Responses to Why Royal Mail should not have been sold, and why I never use courier companies