I’m a day or three late, but the hectic life of a family man over the festive season leaves little time for self promotion, self reflection or self anything very much.
I hope you all had a very happy Christmas and new year. I’m determined to go into this year without any negative passengers. Too many times in 2015 (and before) I had reason to quit internet communities because of twunts full of negativity bringing other people down. A wise man once said, “never argue with a half-wit. They will grind you down and beat you with experience.” This is an ideal I will take with me this year.

I did manage out to the man cave a few times, and I did get some turning done. My son got a carving made for me to hang in the shed. It’s a piece of art. All credit to the craftsman who made it. I have several photos, but none really do it justice. It is far more beautiful in real life. 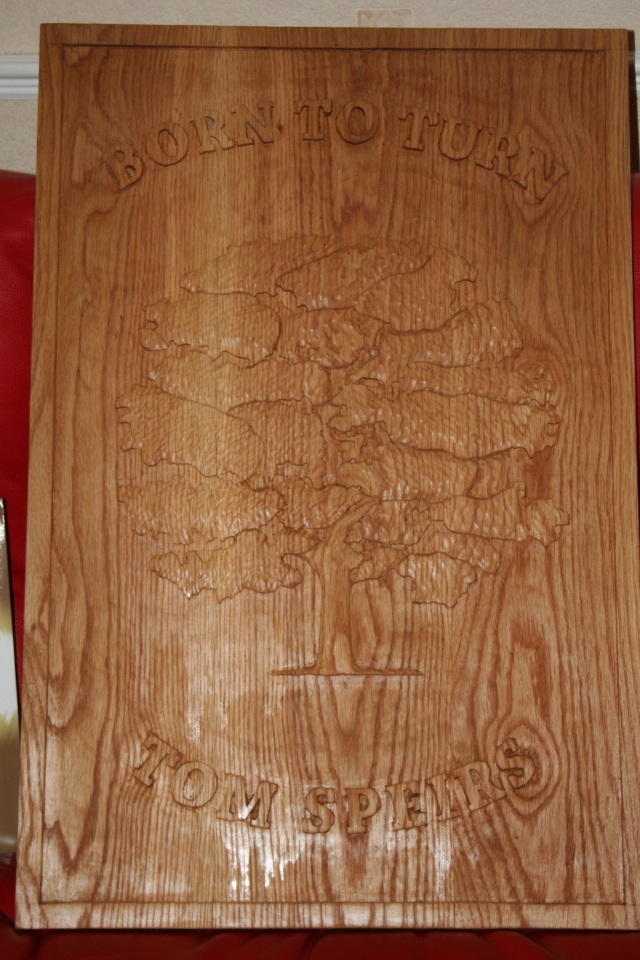 This is before it went up. I know it’s probably just me who can’t take decent photographs. 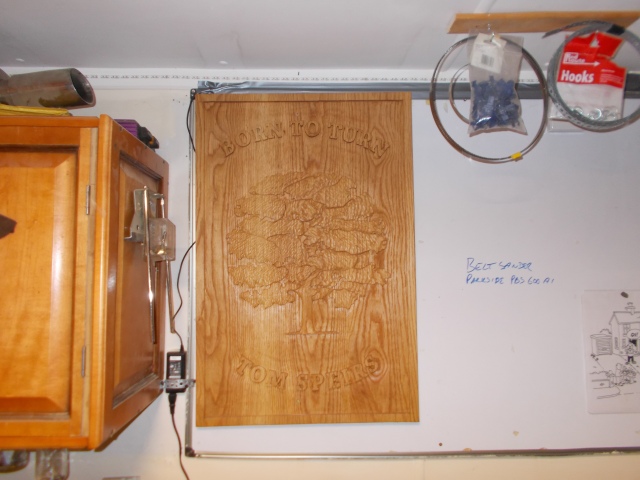 This is it on the wall. I may move stuff around at some point, but this is fine for now.

I have a collection of Woodturning magazine back issues which are full of ideas I want to try out. This little covered dish was featured in an article by Philip Greenwood either in 2014 or 2015. 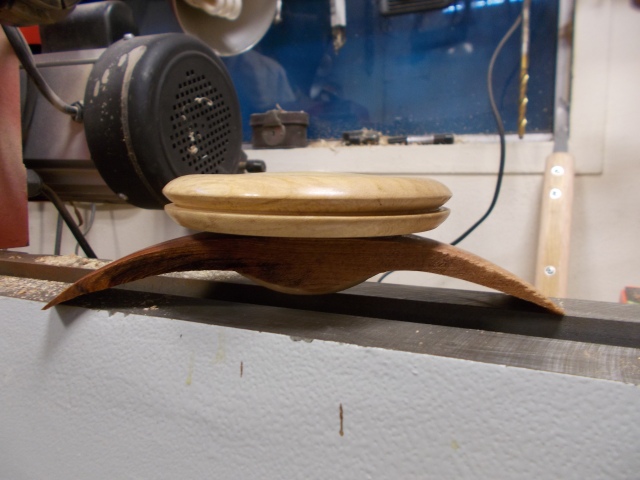 The covered dish is spalted beech, around 3½” in diameter. The arch it sits on is elm. 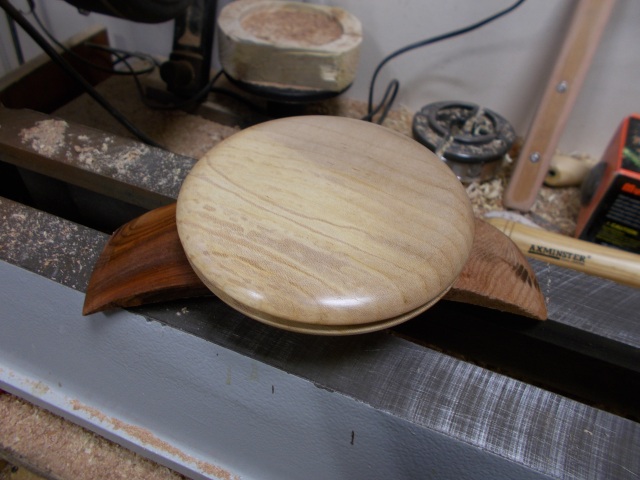 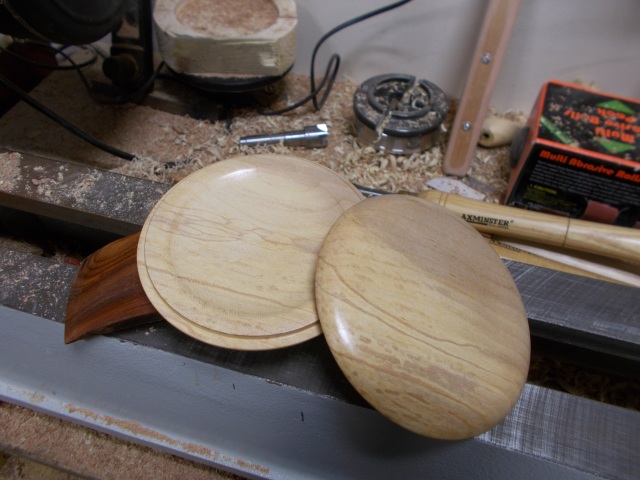 And yes, it opens. The piece doesn’t really serve any purpose, but it is an interesting exercise for a fairly new turner like me. I can see several places I could improve the arc, but it is what it is. I decided quite some time ago never to try changing something once it has a finish on it.

Following the disaster in the bathroom caused by an incompetent plumber, and incompetent repairs by a neighbour’s landlord, I replaced the vanity unit and the pelmet above with some spectacular beech. To complement this, I also turned a soap dish and toothbrush holder from off-cuts of the same timber. Unfortunately there was not enough to make a beaker, so I made this from another piece of beech I had sitting around doing not very much. 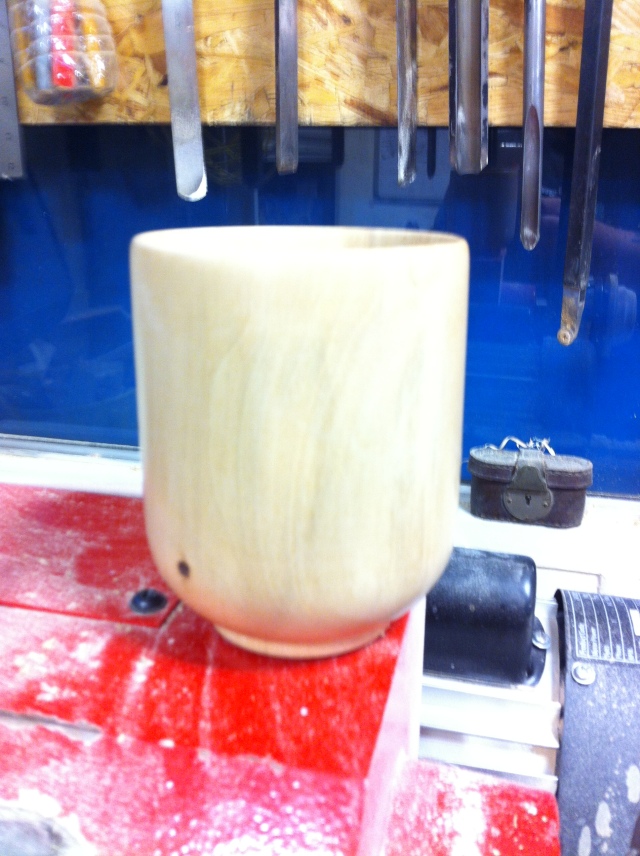 There is some slight spalting in the wood, but nowhere near as much as the rest of the timber used in the bathroom.

I always find getting a decent finish on end grain a chore. This looked much better after sanding.

Again, the photography is not great. The battery went in my Coolpix, so these were taken using the iphone.
Finish on this, as with the rest of the bathroom is a hard wearing polyurethane. Hopefully we will get a few years out of it.

My first bowl of 2015 was a piece of alder with a large bark inclusion. Unfortunately the bark flew off during turning.

I like the odd shape the inclusion creates, and the ripples of the cambium layer once exposed.
I tried to go as thin as I could with this, and almost went right through at one point.

The fibres are toilet tissue thin at some points. I really thought it was going to go through when I was sanding it.

I am keeping with my efforts to have all my bowls and vessels flat-bottomed. I find it much more pleasing to the eye.

Now I need to get myself psyched up for my return to work on Tuesday. That elusive lottery win is still out of my reach. One day though. One day.