Summer! My Favourite Day of the Year

It’s how it feels sometimes here in Scotland. I love my country, but it would be nice to have more decent weather. That said, there are always a few half-wits who start bleating, “it’s too hot,” the second the sun peeps through the clouds. These are the same idiots who complain about the cold and rain.
Some galoots are never happy unless they’re bitching & moaning about something.
When I was about 11 years old, we were visited in school by Greenpeace. They told us that Scotland’s climate would be sub-tropical by the year 2000. I’m still waiting Greenpeace……..

Yesterday was too nice to spend cooped up in the shed. All I did, after cutting the grass, was finish the end grain bowl I stared on last week. 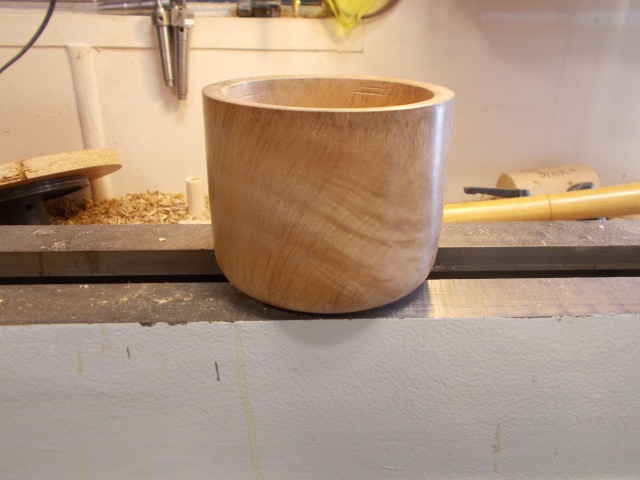 I marked the inside a bit with the chuck jaws because I forgot to pad the jaws. Rookie mistake. The grain is gorgeous though.

Loads of cracks in the timber, all stabilised using thin CA glue. There’s enough meat left to allow me to re-chuck it and repair the chuck marks in the top rim, so I may re-visit this one later.

I might even cut another piece from the chunks I have left and make a lid for this.

I gave the bowl a few coats of Chestnuts sanding sealer. Loads of turners I know swear by the stuff. In the past I have always used Bolgers sanding sealer, and so far I think it is better than the Chestnuts stuff. I may change my opinion as time goes on, but so far the jury is still out on that.

We have been told by the weather guessers that we can expect this nice spell to last for around 90 days, which sounds a bit Biblical. I’m not complaining though. Bring it on!

This entry was posted in Woodturning. Bookmark the permalink.
Handcrafted Pens & Unique Wooden Gifts
Woodshed In The Stowe